Courtesy of the folks at Vagenda, I came across this yesterday: 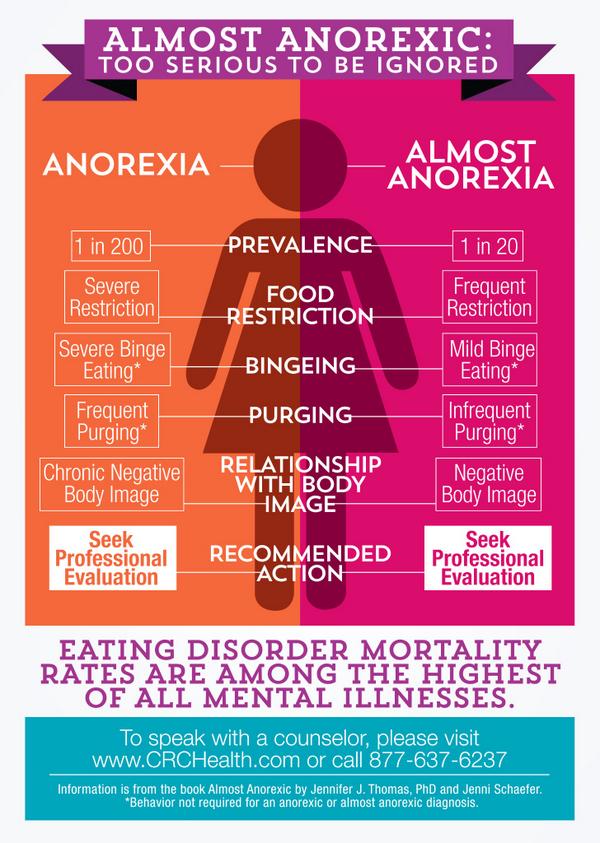 One of the Vagendans asked what people thought about I and I was more than happy to offer my opinion. In short, it made me deeply uncomfortable.

Anorexia is a serous condition characterised by an individual being severely underweight as the result of either restricting calorific intake or purging (by vomiting, excessive exercise or, sometimes, laxative use). Although purging is often associated with bulimia, the key difference between the two is that anorexia relates to an individual being extremely underweight whereas bulimia is associated with being within the expected weight range.

This picture refers to ‘almost anorexia’, which I had never heard of until I saw it. I’m not sure where they got the stat of 1 in 20, since, essentially, ‘almost anorexia’ is a made-up term (although a Goggle search turned this up). Anorexia is a condition which can be treated, although it’s important to note that people still die as a result of it. Equally, body image issues are a significant and growing problem amongst both males and females. We are, unfortunately, socialised in a culture which teaches us that there is only one way to look if you want to be attractive and that anything which doesn’t sit within these narrowly-defined limits is sub-standard. The evidence is there: eating disorders are becoming more common and they are becoming prevalent amongst ever-younger people. We are bombarded with images of the ‘ideal’ body and, whilst it would be crass to say that there are no other factors which can contribute to the development of eating problems, it would take a remarkable person to convincingly argue that this bombardment makes no contribution.

So, given all that, why does the notion of ‘almost anorexic’ make me uncomfortable? Partly, as I said, because it doesn’t exist in the research or clinical literature. There are criteria which have to be met for a diagnosis of anorexia. Technically it’s a mental health problem. The one thing that characterises all MH problems is that they must have a significant impact on functioning. Does ‘almost anorexia’ meet that criterion? I don’t know. Does skipping lunch regularly mean your functioning is impaired? ‘Frequent’ restriction is not the same as ‘severe’ restriction. Lots of people don’t have breakfast. Does that count? I suspect not. I try not to eat too many puddings and biscuits, but it’s not the kind of restricting I that I imagine the label is referring to.

My problem with ‘almost anorexic’ is that it runs the risk of pathologising people unnecessarily. I don’t think body issues are a good thing, but there is a line between body image issues and being anorexic. That line is not set in stone; it is drawn in the sand. Such is the nature of mental health. We work in the grey areas; we don’t have the luxury of monochrome. Equally, getting help early is important, but do we really need to use a term like ‘almost anorexic’? Anorexia is a powerful word and I suspect that being told you’re on the path towards it would be frightening for many folk. Could it convince people to get help? Maybe. But we also know that diagnostic labels can be unhelpful and make people feel ‘ill’. Having body issues doesn’t make you necessarily ‘ill’. Labels have to be used with great care and I don’t think this takes enough care. I have no doubt that the intention is good, but methods are also important. So yes, let’s talk about eating disorders and let’s talk about eating issues. Let’s address those issues before they become something more serious; before the effects on self-esteem become life-long. Let’s stop telling people that there’s only one way to be beautiful or worthy or loved. But let’s not tell people they’re on the way to a psychiatric diagnosis if they’re not. It’s not ethical and, more fundamentally, it could do more harm than good.

I read psychology at the University of London and have an MSc in Clinical Forensic Psychology from the Institute of Psychiatry. I completed doctoral training in south-west London, where I then pursued further training to become a systemic practitioner. I have interests in the areas of LGBT mental health, trauma, neuropsychology and epidemiology, all of which probably says much about me.